MOSCOW (Reuters) – President Vladimir Putin has signed a law allowing Russia’s Constitutional Court to decide whether or not to implement rulings of international human rights courts.

The law, published on Tuesday on the government website, enables the Russian court to overturn decisions of the Strasbourg-based European Court of Human Rights (ECHR) if it deems them unconstitutional.

Russia opens fire on Ukraine again as the West stands by IN THE six months after a cease-fire in eastern Ukraine was supposed to have taken effect this year, Russian-backed forces kept up a low-level barrage of sniping and shelling along the front lines, killing dozens of Ukrainian soldiers while avoiding censure from the Western governments that brokered the deal. Then, on Sept. 1, the guns fell silent — just as Russian forces began streaming into Syria. For two months, the cease-fire held and international monitors reported progress in implementing agreements on the withdrawal from the front

On Russia's ongoing violations in Ukraine

The United States is deeply concerned that ceasefire violations are again mounting in eastern Ukraine. At a press conference just a little while ago, the Deputy Chief Monitor of the OSCE SMM noted that yesterday, in a space of 19 minutes, SMM monitors heard 107 explosions. Attacks by combined Russian-separatist forces all along the line of contact have increased. The Ukrainian Ministry Of Defense reports that 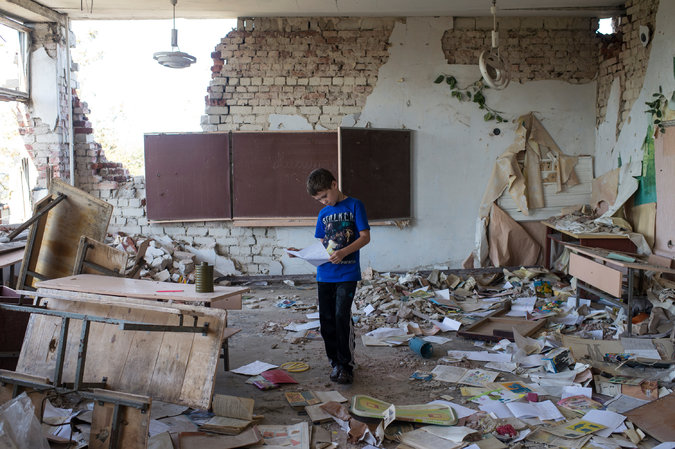 DONETSK, Ukraine — The 28-year-old accountant with a bob of chestnut hair would dash from work to meet her wide circle of friends at bars, restaurants and dinner parties. “It’s not how you spend your time, but who you spend it with,” Irina Filatova, the accountant, said of her humming social life.

That now seems a long time ago, before Ms. Filatova

Stalin and the Russian Orthodox Church Moscow Patriarch Kirill of the Russian Orthodox Church demonstrated a new level of flexibility — personally and, it is important to note, in the organization he controls — when he called on the average TV viewer not “to turn a blind eye” to the significant economic, political and military achievements of a ruler, even one known for “committing

Why Ukrainians Hate When You Say 'The Ukraine'

On Tuesday evening, two Republican presidential candidate hopefuls accidentally enraged Ukrainian Americans with a single word: "the." John Kasich and Donald Trump referred to Ukraine as "the Ukraine," a common but unfortunate mistake. Lindsey Graham made the same blunder at the third GOP debate.

Adding "the" before Ukraine is actually a throwback to Communism. Prior to the fall of the USSR, Ukraine was known as "The Ukrainian Soviet Socialist Republic." In 1991, the USSR fell, splitting Ukraine from Russia and permanently

The Lure of Returning to Business as Usual With Russia

The EU’s sanctions on Russia come up for renewal in the coming weeks and months. Until now, it was assumed the measures would be rolled over. The so-called Minsk II accord, which was negotiated in February by German Chancellor Angela Merkel, Russian President Vladimir Putin, and his French and Ukrainian counterparts to end the fighting in eastern Ukraine, has not been fulfilled. Merkel has always insisted that the terms of the accord be implemented fully before the EU considers lifting

Putin Is So Mad At Ukraine That He's Bombing Syria Former UNLV basketball coach Jerry Tarkanian was once famously quoted as saying, "The NCAA is so mad at the University of Kentucky that they're going to put Cleveland State on probation for two more years." It's an analogy that could apply to Russian President Vladimir Putin, who is punishing Syria for his failures in Ukraine.

The NCAA was too afraid to punish the historically prestigious Kentucky Wildcats for breaking the rules. So they